The city of Cosa

Posted at 15:57h in Art places by admin_enjoym

LThe city of Cosa rests on the coast of the Tyrrhenian sea on a rocky promontory where today Ansedonia is located. The city was built by the Romans in 273 b.C., after defeat of the forces of the etruscan cities of Volsinii and Vulci, in a strategic position that made it soon into an important economic and commercial hub.
Of the original structure remain only some ruins of old buildings; the forum, the walls, and the temple of Jupiter.
The name derives from the older Cusi or Cusia, a small Etruscan center that lay in the place of today’s Orbetello.


The city of Cosa, old open-air archeological site, visitable all year round, is one of the most inspiring attractions around Ansedonia.
The inhabited center was surrounded by walls, still well-preserved today, 1.5km long with three gates and 18 towers, one of which is circular.
A visit to the archeological area starts from the Porta Fiorentina (northwest), through a dirt path that originally led through the part of the city with the homes of the settlers. Along the path you can rest by the skeleton house, so called for the discovery of a skeleton in the cistern, and admire the spa complex, only partially brought to light.
Continuing you meet the house of Quintus Flavius on whose original floor plan now stands the National Archeological Museum of Cosa , where the decorations from the time of the acropolis made of ceramic are well-preserved, along with objects of metal and ivory found in the houses of the old city.

The Forum and the Acropolis

The area of the forum and that of the acropolis are still well visible today.
The forum, which was accessed through an archway of which the base is preserved, was faced by commercial buildings, Atria, the basilica of which sixteen columns remain, the complex of the Curia Comitium with the circular stairway and the prison.
The acropolis instead, having been protected by its own walls, housed the main place of worship of the city, the Capitolium.

The ‘Spacco della Regina’ and the ‘Tagliata’

At the foot of the promontory on which the the colony rested the gate of the city was built: Portus Cosanus of which you can still see remains half submerged in the sea. 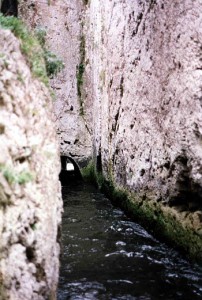 The entire area surrounding the port was equipped with imposing infrastructure, finalized with the creation of a safe shelter for boats. To avoid the burying of the port itself and the lake behind it the force of the currents of a runoff of the lake and a natural crack in the rock, called the ‘Spacco della Regina’ were used.
Later the ‘Spacco della Regina’ was substituted by an artificial construction, today named the ‘Tagliata’, a canal dug out of the rock around 80 meters long. The flow of water was regulated through wooden bulkheads, in a way so that the current would sweep away debris.
This magnificent work of hydraulic engineering can still be admired today, from the stairway that runs along the promontory.

How to get to the city of Cosa

For those coming from Grosseto via the Aurelia the first exit for Ansedonia is recommended; the second exit for Ansedonia for those traveling towards Grosseto from Rome. Continue straight until getting over the railway bridge, then turn left. Turn left again at Via delle Mimose leaving the strada comunale di Ansedonia on your right. Turn left again at Via delle Ginestre until you meet the dirt road that takes to the parking lot of the Archeological area.