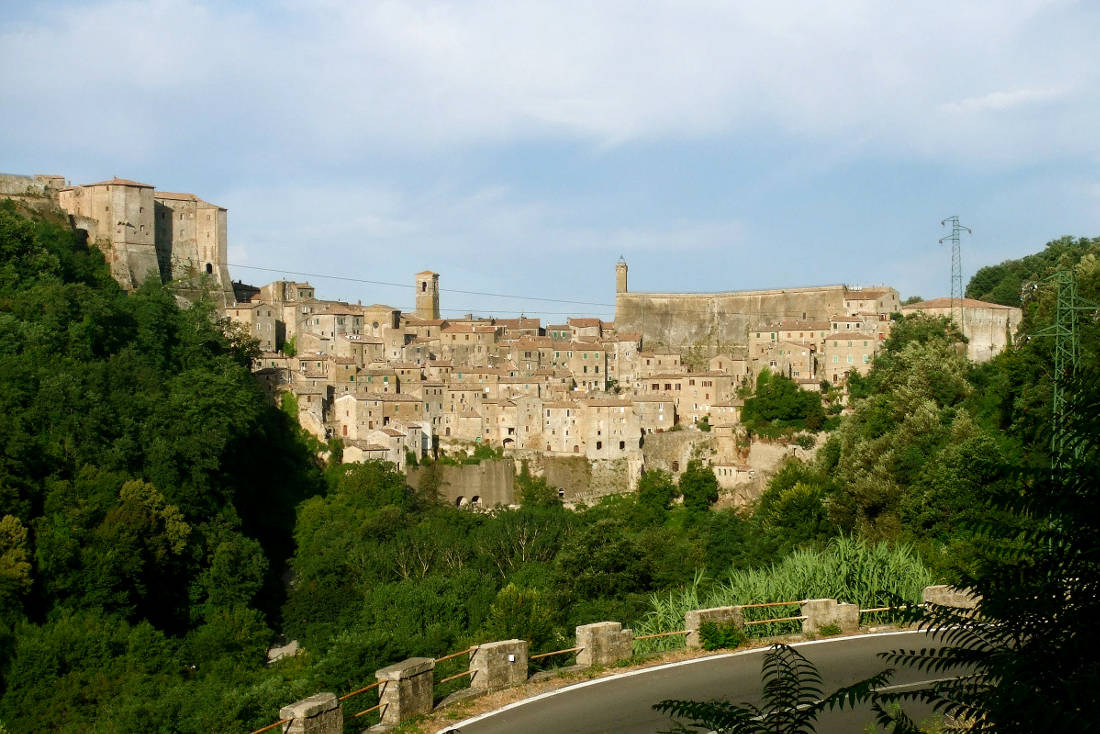 Posted at 14:21h in Villages and towns by Staff

Sorano: the Matera of Toscana

Sorano is located in the south-eastern part of the province of Grosseto called the Tuff Stone Area. The small town, perched on a tuff stone cliff, surrounded by lush and unpolluted woods preserves the typical medieval structure of the unique houses dug from the tuff stone.

The Colombari and the Quarry Roads

At the entrance to the town you’re welcomed by the Colombari, enormous holes dug out of the rock, likely dating back to primitive periods and later adapted to the needs of the Etruscans and Romans who used them house messenger pidgeons.
Not only the Colombari take us to a magical and surreal atmosphere, as soon as we get away from the wtown we encounter the Quarry Roads: deep corridors dug out of the rock between Pitigliano, Sorano and sovana. Traversing the Quarry Roads, in some places 25 meters deep, we meet tombs and carvings from the Etruscan period, and the unique scaccia-diavoli of medieval origin: small niches with holy images that give comfort to travelers. The vegetation rich in ferns, mosses, lichens vines and lianas give the sensation of being in a magical timeless place.

Walking the Quarry Road of San Rocco, the most interesting around the town of Sorano, you reach a rocky comple situated on a grand panoramic terrace. Here you can walk through the many habitations dug out of the tuff stone: primitive housing, colombari and tombs, and admire the small church of San Rocco, which preserves within it the remains of a 17th century fresco. From higher up on the hill the town of Sorano and the valley of the Lente river are revealed in a wonderful view.
Not far from Sorano, through a suggestive path through the woods you reach Vitozza, rocky settlement with over two hundred caves. The circular holes that housed the pillars of the first homes are still recognizable, to bear witness to the presence of man since prehistory, together with ancient irrigation works and cisterns. Going through these caves with their niches, furnaces, lamp holders, flowerbeds, some built with two floors connected by stairs, is equivalent to traveling through time.
The medieval village on a nearby highground, welcomes you with the ruins of two castles, a circular tower, parts of the walls, two access gates and what remains of the 13th century church. The entire area was inhabited until the 19th century and then abandoned. The institute of the Archeological Park of Vitozza has permitted the restoration and preservation of these magnificent testaments to history.

The center of Sorano: Fortezza Orsini

Around Sorano you can run into the ruins of Montorio castle, with its imposing tower and old moat, or those of Ottieri castle, a building with shoe base and tower that surrounds the gate of the old medieval walls.
The Collegiate of San Nicola, 13th century church, Palazzo Comitale, the clocktower and the Masso Leopoldino, obtained from the squaring of an enormous mass of tuff stone whose shape reminds of a ship, are wonders of the historical center of Sorano. The Merli Gate, once an access gate, is now the passageway to cross the Lente valley by foot, between caves of Etruscan origin, lush forests and walls dug from tuff stone.
Never conquered, the Orsini fort overlooks the town of Sorano, built by the Aldobrandeschi in the 12th century and passed down to the Orsini family with the marriage of Anastasia Aldobrandeschi and Romano Orsini. The dimensions of the fort can only be partially grasped as it was built down, with five underground floors with a collection of galleries and subterranean passages in which it is difficult to orient oneself.
It was a self-sufficient structure, with cisterns for the collection of rainwater, a mill, a tuff stone quarry and could house if necessary all the inhabitants of the town.

How to get to Sorano

From Grosseto: Contine on the S.s. 322 for around 20km until Scansano, then take the S.s. 323 for another 20km and then the Strada Provinciale 10 for around 1km. Then turn right and continue on the Strada Statale Maremmana for 6.5km.

Activities and attractions in Sorano