The town of Bagno Vignoni lies in the heart of Tuscany inside the Artistic Natural Park of Val D’Orcia. It’s a place out of time, a remnant of the medieval era substantially unchanged. From Bagno Vignoni it’s easy to reach and visit the nearby towns of Pienza and Montalcino and the Park of Mount Amiata.

The waters that spring up in this place have been used for spa purposes since the times of the etruscans and romands as numerous finds preserved in the Archeological Museum of Siena show. In medieval times the town was known for its vicinity to the Via Francigena, walked by pilgrims on their way to Rome. In medieval and renaissance times it was frequented by illustrious characters like Pope Pious II, Catherine of Siena and Lorenzo de’ Medici.
The main square of Borgo Vignoni “Piazza delle sorgenti” seems an illustration from a book of fables: it’s occupied by a rectangular tub from which warm, steaming thermal water springs from the underground aquifer of volcanic origins. The loggia of Santa Caterina di Siena, the renaissance buildings, the bars, the summer residence of pope Pious II and the church of San Giovanni Battista are positioned around the tub, like around the main square of every town, but the play of light and color from the jets of water and the steam create a unique timeless view.

The park of the mills

The waters that come from the thermal tub are partly directed towards the stee escarpment of Parco Naturale dei Mulini,and partly feed the spa facilities of the small town. In the Park, accessible thanks to a wonderful path through the amazing mediterranean vegetation, there are four medieval mills dug out of the rock: a work of hydraulic engineering unique in its kind, fundamental for the local economy as the thermal springs allowed its functioning even in summer, when the other mills of the area were stopped because of the running dry of the rivers. Built in the 12th century, they were operational until the mid-fifties. They were acquired by the city of San Quirico d’Orcia in 1999: if well-preserved existing equipment was salvaged, like the ancient grinding stones by the entrances, in other cases they were rebuilt to give a full idea of how they worked.
The first two, called Mulino di Sopra and Mulino Buca, are entirely dug out of the rock. The underlying Mulino di Mezzo is partly above ground (the grinding chambers) and partially underground ( the wheel rooms). The Mulino da Piedi is a ruin covered by brambles. Even the pipelines and the baths for accumulating the necessary water for functioning of the grindstones are dug out of the rock.

The free spas and the spa facilities

It’s no longer possible to bathe in the bath of Bagno Vignoni, but if you want to freely enjoy the thermal waters you can reach in the lower part of the Parco dei Mulini a bath dug from the rock with calcium deposits that offer up a thousand shades of green.
Alternatively there are numerous spa facilities, where you can have mudbaths, hydromassages, inhalations, irrigations, nebulizations, aerosols and other .spa treatments,

From Bagno Vignoni you can get away towards enchanting landscapes: an easy hiking trip and is the Anello di Bagno Vignoni (4 hours -12km).
The path starts from Parco dei Mulini, with a path that runs along the Orcia river and reaches the remains of the bridge that collapsed at the beginning of the 20th century because of a flood, and continues towards the Castle of Ripa, built on the unique gorges of the Orcia river.
After a slow climb, you go down towards the characteristic medieval town of Vignoni, which dominates the Val d’Orcia. Of the medieval castle a gate, a tower and the notable roman church of San Biagio remain.

How to get to Bagno Vignoni

From Siena: S2 Cassia towards Rome – Pass San quirico and take the fork towards Bagno Vignoni.
From the south: A1 – exit Casello di chiusi – take the S146 until San Quirico d’Orcia – S2 until the fork to Bagno Vignoni. 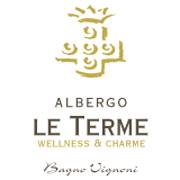